EOTech XPS2
Knight’s Armament Carbine Handguard
Magpul CTR Stock Od Green
Magpul RVG Od Green
Magpul ASAP & MS2 Sling
First of all the Smith & Wesson M&P15OR is a great AR15 with an even better start out price. It is the first and only AR15 that I have owned, so being new to the world of AR’s, I wasn’t looking to spend much, as I didn’t quite understand what made one pricier than the next. I picked my M&P up a little over a year ago for about $599… a perfect price range for the beginner AR platform. I have always known and been around S&W and knew that it should be a reliable gun just by the brand name, so I had to get one. Since then, I have learned more in the AR world of brands, accessories, features & customizations but am still very pleased with my purchase. After several trips to the range and several hundred rounds through my S&W, not a single hiccup yet! I would feel comfortable enough with my setup so far to keep it for home protection… or even take it to battle! My only partial regret was choosing the “OR” edition of my gun and not going with something that came with the iron sight setup already. However, this has given me a better chance to pick and choose my own sight setup to my liking. I would 100% recommend this AR to anyone on the market looking in this price range. 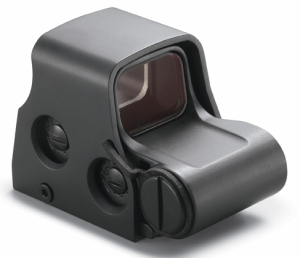 After a while of having a cheap red dot sight I decided it was time to step it up a notch. I chose the EOTech XPS2 for a couple of reasons; one, EOTech’s name brand has always been a good one. If it’s good enough for the military.. it’s definitely good enough for me. Secondly, I want my setup to be ready for CQB (close quarters battle) more than anything. I figure if the SHTF, the place I would probably be more apt to using my AR would be less than 100yrds and if I did want to stretch it out.. there’s always the option of the magnifier. The way I see it, if you take a look at Afghanistan and other wars most of the battle goes on in more of a CQB situation. Don’t get me wrong, I know there are instances where the battle goes out a lot further but I believe that a holo vs ACOG in the CQB would be a no brainer. Plus back to price wise… $400+ vs $1200+ really helps keeping that extra cash in your pocket. And finally, I had pretty much decided on the EOTech right around my birthday when it just so happened to go on sale on Amazon… It was like a sign.. I needed this sight, so I purchased it and had it within two days! It is everything I hoped it could be. After a few mags at the range, she was shooting tacks. It has been a very reliable Holo (holographic) so far. I haven’t put it through the trenches such as combat training or anything so I can’t speak for that end of reliability, but so far.. it has perfectly fit my needs. I would feel very comfortable in using my EOTech in a battle scenario should it ever be called upon.
Ahh, the Knight’s Armament hand guard… I was first attracted to this set up from the movie “I AM LEGEND.” I know you shouldn’t believe everything you see on tv, so I did some research on it. Turns out, it was a pretty nice, fairly expensive drop in rail system. Just so happened that a friend had one and no longer needed it, so they handed it down for the greater good to be used on my AR setup. I couldn’t have asked for any nicer of a gift. It has been an extremely sturdy RAS so far. No wiggle(wiggle bugs the crap out of me) so I am very pleased on that end. It has a very appealing look and design and holds everything you need on your setup.

The Magpul CTR… enough said! I’m sure a lot of you are wondering why there is such a big price difference between the CTR and the standard Magpul MOE, or maybe asking is the friction lock worth the difference… short answer, YES! Once again, NO WIGGLE. The way I see it, your AR is not a toy.. so don’t put toy parts on it. I don’t really have that much against the MOE, it’s just that sturdiness has always been a key concern with my AR. I want it to be like one solid machine! When you get play, I would be afraid that something could go wrong if you really put it through the works. I really enjoy the friction lock on this stock. It has held up very well and is just as sturdy as the day I purchased it. Oh, and that OD Green on the CTR is one beautiful shade of green. Blends in and tends to transform shades depending on backgrounds and shadowing. I would highly recommend the CTR to anyone looking for a nice stock in the $100+/- range.
As for the Magpul MS2 sling and ASAP adapter, I have enjoyed them. I would be willing to feel other slings on my AR, but so far I am satisfied. I do like the raised positioning of the MS2. I feel that in a battle situation it would be excellent for quick aiming and easy conversions from left to right cornering. The ASAP adapter itself is in a perfect position and allows sliding of the sling smoothly making the swift changes from left to right easily possible. The only thing that I may would change about this sling is possibly widen the strap a little. I’m sure that over a vest or tactical gear that it wouldn’t matter, but over clothing it’s a bit uncomfortable. I know that say that there is ZERO comfort in battle… but why does it have to be uncomfortable all the time? They could even just add an adjustable strap pad that would solve the issue. All in all, I would still recommend this sling and adapter to someone in the market.
I do have a few more future plans for my AR and possibly even more builds to come. I am potentially planning on going SBR down to an 11.5″ barrel and adding a Daniel Defense 10″ Lite Rail. I also plan on eventually going through the process of getting a suppressor as well. Only time will tell. I would prefer to have a few AR’s. One SBR, one for longer range, maybe a 300 Blackout setup and wouldn’t mind going with a Beowulf 50 cal…. If I do, I will be sure to update!

I haven’t written much lately.  It isn’t that I haven’t had anything to write about or that I didn’t feel like writing, but sometimes you just have more important things to do than spend time on your gun hobby.  That all changed on Saturday when I got to spend some time at the pistol range with a good friend of mine.

Before Saturday, I hadn’t been to the gun range in over 10 weeks, an eternity for a guy who usually shoots twice a month.  But what made this range day special was being able to take a buddy shooting who has been having a rough time.  My friend, lets call him John (not his real name) is going through a tough bout with cancer.  John has a great outlook and is a real fighter.  I am sure he is going to beat this thing, but that doesn’t make it any easier.

John and I headed to the range with a number of pistols to shoot, and we had a great time.  Another friend of ours came along and brought a few big range toys with him.  It was a blast getting to see John shooting a Desert Eagle in .50AE and a Smith & Wesson 500.  John’s grin was from ear to ear and isn’t coming off any time soon.

From .22LR to 500 S&W, we had a great time.  Maybe it was my best day at the range ever.  Not because of the guns we shot or the groupings we had, but because of the company we kept.

A lot of people are going through tough times right now.  Who can you share your love of shooting with?  Can you brighten their day with good company and a day at the range?

The Smith & Wesson Bodyguard is the ultimate in concealed carry pistols. Its small, light weight and with the right ammo packs a punch.

Size and weight are the two most important factors when shopping for a concealed carry gun. Don’t fool your self if the gun isn’t comfortable you will not carry constantly. The Smith & Wesson Bodyguard is a sub compact gun weighing in at 11.85 oz which makes it ideal for every day carry.

The Bodyguard is the first personal protection pistol with an integrated laser made by Isight. Insight Technology is an industry leader in the manufacturing of tactical weapon lights and lasers. The laser is easy to operate and vary visible during day or night shooting.

What i love most about this gun are the dove tail sights. The sights are large and easy to see, unlike the Ruger LCP which barley has any sights. The sights on the Body Guard are also adjustable for windage which is a huge advantage over most pocket .380 pistols.

The Body Guard fits perfectly in my hand with great balance and comfort. Of course it is a subcompact gun so my pinky is left hanging but with a little training its not a problem.

Smith & Wesson did an awesome job designing this pistol. The Magazine release, slide stop, and safety are big enough to make them easy to operate but small enough to prevent accidental activation. The corners are well rounded to prevent snagging. unlike some Smith and Wesson firearms the Bodyguard will fire with the magazine removed allowing you at least one defensive round when reloading.

What impressed me most about the Smith & Wesson Bodyguard was the accuracy and reliability. During testing i fired 500 rounds of Blazer 95 gr .380 ammo with no malfunctions. This kind of supprised me because all guns are expected to jam during the break in period, first 200 rounds or so. I was equally impressed with the accuracy of this gun. I was able to fire 2 inch groups at 3 yards, which is pretty good for a pocket pistol.

When the Bodyguard was first released their where problems with a few lasers being difficult to turn on and off. i spoke to Smith & Wesson about this problem and they assured me the problem had been fixed.

This is an awesome gun, thats perfect for everyday concealed carry. The accuracy, reliability, weight, and relatively affordable price ($399) make this the ultimate pocket pistol. If you own or have a comment about the S & W Bodyguard or any comment that might help my readers please leave your comment below. I have also posted the specs below.